There are many different terms for pet desexing. It can also be called spaying, neutering or simply having your pet fixed. When a male dog is fixed, what does it actually fix? You might have heard that desexing a male dog can reduce their level of aggression, but this isn't necessarily true, and it's not something that would be evident. Having said that, there are a number of positive behavioural changes (potentially including their aggression levels) that your dog should begin to exhibit after he has been desexed. Read More
Grooming enhances the general health of your dog in a big way, but how do you groom an aggressive dog? Every dog gets aggressive during grooming for a reason, which you should first identify. If the previous grooming was a bit traumatic, your dog will resist the next one and become aggressive. Here's how you handle a dog that gets aggressive when being groomed: Identify the Cause of Aggressiveness Did your dog experience skin cuts or razor burns during the previous grooming? Read More
Buying dog foods may seem a simple task, but it might not be so when buying food for an allergic dog. Does your dog lick its paws, or does it have constipation, runny stool or a gassy stomach? Or does it scratch its body, but you can't find any flea on its fur? Food allergies could be the cause! If your dog suffers food allergies, you could use friendlier diets that hopefully won't trigger them. Read More
The conjunctiva, which is the clear mucous membrane that covers the front of the eye, can become infected in newborn kittens and tends to be noticeable not long after the eyes open for the first time. It's most commonly caused by a vaginal infection in the mother cat, but it can also be caused by bacteria in the kittens living environment, particularly if it's not clean enough for newborns. Here's some information about bacterial conjunctivitis in kittens and how to treat it: Read More
Has your cat continued to lose weight despite you giving it nutrient-rich foods every day? The cat's digestive system isn't the problem; its thyroid gland might be to blame.Hyperthyroidism is a severe disorder among cats. A cat develops hyperthyroidism when the thyroid gland—found in the neck—secretes excess thyroid hormone into the circulation system. A cat with hyperthyroidism will not just show increased appetite and weight loss; it will also drink a lot of water, urinate frequently at different points in the house, have a poor coat, become restless (overactive), have difficulty breathing, look depressed and weak, vomit and diarrhoea periodically and show 'cranky' behaviour or aggressiveness. Read More 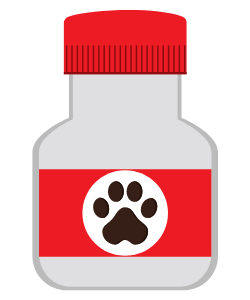